The director of the CDC insisted Warnings that the monkeypox is out of control were ‘misinformed and off base’ on Monday despite cases in the US quadrupling over two weeks.

Dr Rochelle Walensky also claimed in a statement that it was still possible to ‘significantly decrease’ infections thanks to more testing — with about 10,000 swabs carried out a day — more vaccines, and more awareness.

Walensky’s comments came after Dr. Scott Gottlieb, former commissioner of the Food and Drug Administration, warned on Sunday that the window to get a handle on the Tropical disease had likely already closed.

Firing a broadside at the Centers for Disease Control and Prevention (CDC), he also accused the agency of repeating the same mistakes as when Covid first arrived.

Dr Bill Hanage, an epidemiologist at Harvard University, told DailyMail.com today it was not yet clear whether the disease was out of control — although this should emerge in the coming weeks thanks to ramped up testing.

America currently has about 1,900 cases of monkeypox — up from 500 two weeks ago — but many experts fear there are already several thousand. 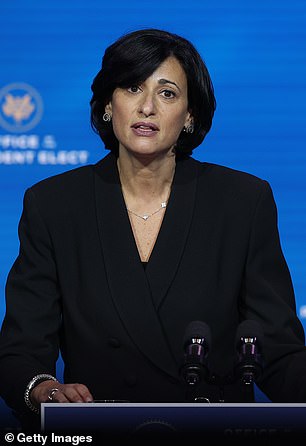 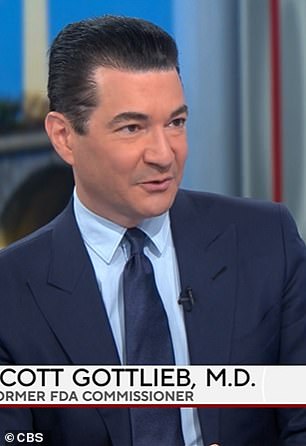 Dr Rochelle Walensky, who heads up the Centers for Disease Control and Prevention (CDC), claimed it was ‘misinformed’ to say monkeypox was already out of control. But Dr Scott Gottlieb, a former Food and Drug Administration commissioner, made the warning this weekend as case numbers continued to accelerate

Insisting monkeypox could still be contained, Walensky said in a statement emailed to DailyMail.com: ‘(Gottlieb’s) interview was misinformed and off base.

‘It’s true that we have work to do — here and internationally — and are likely to see more monkeypox cases in the near term.

‘But it is possible to significantly decrease the number of cases and contain the current monkeypox Outbreak through education and increased testing and access to Vaccines — all priorities we’ve made dramatic progress on.’

Walensky also said the CDC was now carrying out 80,000 swabs for monkeypox a week, up from 6,000 when the disease first emerged in early May.

She also claimed credit for the vaccine roll out, which has been repeatedly criticized for being too slow to get doses to people.

America has faced three outbreaks of monkeypox in the past, with each being successfully contained. The largest was in 2003 when 47 people caught the virus from infected pet prairie dogs.

But the current Outbreak differs from the others in that the disease is spreading following close contact during sex, particularly among gay and bisexual men.

Warning Sunday that monkeypox was likely out of control, Gottlieb told CBS: ‘I think the window for getting control of this and containing it probably has closed.

‘If it hasn’t closed, it’s certainly starting to close.’

He added: ‘We’re probably detecting just a fraction of the actual cases because we had, for a long time, a very narrow case definition on who got tested.

New York City is set to delay rolling out second doses of the monkeypox vaccine because it has too few doses, health officials say amid warnings the US Outbreak is already out of control.

The city’s Department of Health warned Friday that it would likely be unable to meet this deadline because it has received too few doses from the federal government.

Guidance states patients should receive their second dose of the jab four weeks after the first to ensure best protection.

New York — which is at the Epicenter of the Outbreak — has switched track to prioritize getting first doses to as many patients as possible. It is also releasing the 1,000 doses it initially held back for second shots.

Dr Rochelle Walensky, director of the Centers for Disease Control and Prevention (CDC), sought to calm fears over a vaccine shortage telling STAT News that New York City was among those set to receive yet more deliveries.

Dr Peter Marks, director of the Food and Drug Administration’s Center for Biologics Evaluation and Research, said it was ‘not recommended’ to delay second doses.

‘By and large, we’re looking in the community of men who have sex with men and at STD clinics.

‘So we’re looking there, we’re finding cases there, but it’s a fact that there’s cases outside that community right now. We’re not picking them up because we are not looking there.’

Gottlieb also compared the response to monkeypox to that against Covid, saying the US was making ‘a lot of the same mistakes’.

They pointed to a lack of testing early on and too few vaccines being made available quickly as warning signs that lessons had not been learned.

Initially, the CDC was carrying out Barely 100 tests a day Nationwide while it struggled to hammer out deals with commercial laboratories.

This has now risen to more than 10,000, but many medics are still saying they are having trouble accessing the tests because patients do not meet the criteria to be eligible.

New York is currently offering the jab to gay or bisexual men who have multiple sexual partners every two weeks.

It is releasing batches of up to 9,000 appointments at a time, but these are being booked out within minutes.

Supplies are so low that the city has also shelved plans for second doses — due four weeks after a first jab — in favor of inoculating as many people as possible.

Residents have blasted the roll out of so few vaccines as ‘ridiculous’ considering the city has a population of more than eight million.

And local politicians have also slammed the health department for failing to take action quickly to curb the outbreak.

Hanage says it is still unclear whether the monkeypox outbreak could be contained.

‘There’s more testing available now thanks to the likes of labcorp, and it remains to be seen exactly how large the iceberg of undetected transmission chains is now we are looking for them,’ he told DailyMail.com.

‘That will determine whether it can be contained.’

He also agreed with Gottlieb that the CDC appeared to be repeating many of the same mistakes it made during the early days of Covid.

‘I think (Gottlieb) is right to comment that there are points of comparison in the response. Slow testing roll out for instance,’ he said.

‘I know from colleagues that they’ve struggled to get tests for patients with lesions that would be considered “suspicious”.’

Monkeypox cases have spiraled in recent days after the CDC ramped up testing for the virus, allowing it to break through the backlog.

But it can take several days to diagnose a case after symptoms appear, because the tests rely on swabbing pustules which only appear in the later stages of infection.

This leaves a window during which someone could unwittingly spread the infection to others.