A new study published on Wednesday in the journal Nature by University of Bristol and University College London researchers found that People’s ability to digest lactose became common almost 5,000 years later than the first signs of human milk consumption, which date back to around 6,000 BC.

They also found, using new computer modeling methods, that milk consumption was not the reason for the increase in lactose tolerance.

“I’m excited about the statistical modeling method that we developed. As far as I’m aware, nobody’s done that before,” said Thomas.

While breastfeeding, babies are still tolerant of lactose

What is lactose intolerance?

All babies can normally digest lactose. But for most of them, this ability will start to wane after they wean off breastmilk.

Today about two-thirds of people are lactase non-persistent, which means they can’t digest lactose, the main sugar in milk.

People who are lactase non-persistent cannot produce an enzyme called lactase, which breaks down lactose. When this enzyme is absent, lactose is free to travel to the colon, where bacteria feast on it.

This can cause unpleasant side effects, like cramps, farting or diarrhea. Together these symptoms are called lactose intolerance.

The results of this study are contrary to a widespread belief that our prehistoric ancestors’ consumption of dairy led to the evolution of a genetic variation allowing them to digest lactose even after adulthood.

This assumption can be partly traced to the marketing of the alleged health benefits of lactose tolerance. For years, milk companies, doctors and even nutritionists have peddled milk and dairy as important supplements of vitamin D and calcium and good sources of uncontaminated water.

But the researchers quickly dismissed these ideas after analyzing a huge set of DNA and medical information of people in the UK. They found that whether or not they could tolerate lactose had little effect on people’s health, their calcium levels or whether they drank milk or not, said Thomas. 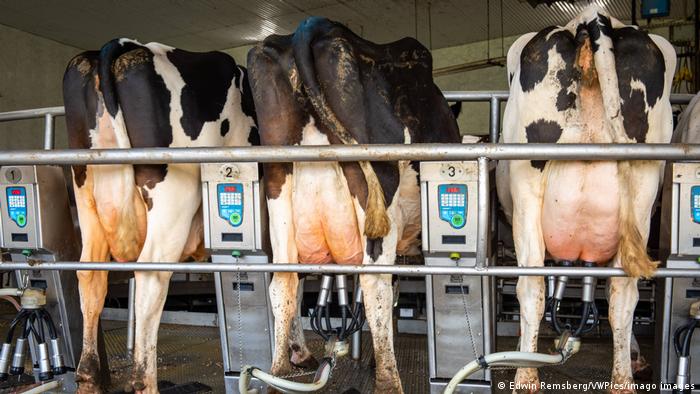 The global dairy industry uses about 1.5 billion cattle and was valued at nearly 830 billion dollars (817 billion euros) in 2020

Why did lactase persistence evolve?

Genetic studies show that lactase persistence is “the most strongly selected single gene trait to have evolved in the last 10,000 years,” said Thomas.

At around 1,000 BC, the number of humans with the capacity to digest lactose, which is encoded in one gene, started to increase rapidly.

After discovering that milk consumption was not behind this burst of growth, the researchers tested two alternative hypotheses.

One hypothesis was that when humans became exposed to more pathogens, symptoms of lactose intolerance combined with the new infectious agents could turn deadly.

“We know that pathogen exposure would have gone up over the last 10,000 years as population densities increase, as people live closer to their domestic animals,” said Thomas.

The other hypothesis had to do with famines. When the crops sown by lactose intolerant prehistoric populations failed, milk and dairy products became some of their only options for nourishment.

“If you’re a healthy person, you get diarrhea. It’s embarrassing. If you are severely malnourished and you give yourself diarrhea, there’s a good chance you’re going to die,” said Thomas.

The researchers used the same computer modeling methods to examine whether these ideas could better explain the evolution of lactase persistence.

“And they did, way, way better,” said Thomas. “All these theories that ultimately relate to milk use don’t seem to help.”

The study Mostly focused on European populations, and more research is needed for other continents.

Unfortunately, finding ancient DNA in African countries is trickier because it’s hotter, “and heat is a big determinant of whether DNA survives,” said Thomas.