Regular use of erectile dysfunction (ED) medicine may increase a man’s risk of developing vision issues at some point in his life, a new study finds.

Researchers from the University of British Columbia (UBC) in Vancouver, Canada, found that men who use ED medication like Viagra and Cialis are a staggering 85 percent more likely to develop eye issues that could cause vision problems – including blindness – than other men.

While the risk of going blind, or suffering any other issue as a result of erectile dysfunction medicine, remains extremely low, researchers are warning that this may be an understated side-effect.

Around ten percent of men will develop ED at some point in their lives, and these medications are very common remedies for it.

Researchers who published their findings Thursday in JAMA Ophthalmology, conducted a massive study that included data from over 200,000 men.

They gathered health insurance claim data from men that had not experienced an eye issue in the year before they started ED medication.

They found that ED medication recipients were 2.58 times as likely to report a case of SRD, which they describe as a ‘collection of fluid behind the Retina with no Tears or breaks’ in a statement.

Rates of RVO, which is a ‘blood clot in the veins or arteries of the retina’ were 1.44 times higher among ED patients who received medication.

ION, which compromises the body’s blood supply to a person’s optic nerve, and can even lead to blindness, was 2.02 times as likely in recipients of the drug.

While the likelihood of developing any of these conditions was still very low, researchers are alarmed by their findings.

‘These are rare conditions, and the risk of developing one remains very low for any individual user. However, the Sheer number of prescriptions dispensed each month in the US — about 20 million — means that a significant number of people could be affected, ‘Dr Mahyar Etminan, an associate professor in the department of ophthalmology and visual sciences at UBC, said in a statement.

‘Regular users of these drugs who find any changes in their vision should take it seriously and seek medical attention.’

Researchers can exactly determine the mechanism of this increased risk, and note that they have only proved correlation, not yet causation.

The believe that the way the drugs impact a person’s blood flow is responsible for the eye issues, though. 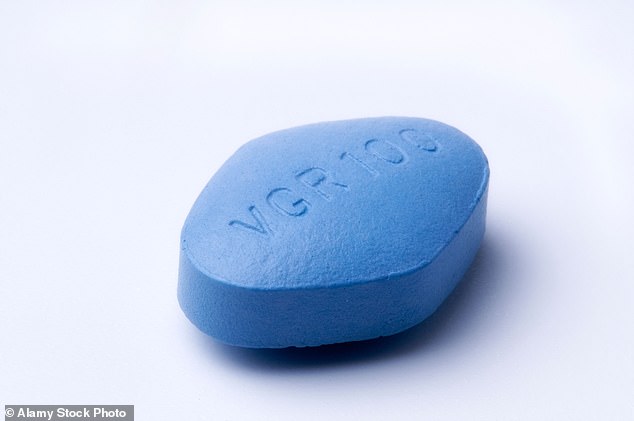 Around half of the men in their 50s suffer from ED. Usage of drugs like Viagra (pictured) has rocketed in recent years as a result

‘These medications address erectile dysfunction by improving blood flow, but we know that they can also hinder blood flow in other parts of the body,’ Etminan said.

‘So although our study doesn’t prove cause-and-effect, there is a mechanism by which these medications could conceivably lead to these problems.

‘The totality of the evidence points toward a strong link.’

ED is a very common issue in men, especially as they get older.

SingleCare reports that Men over the age of 40 are three times as likely to experience ED when compared to Younger men.

Half of the men in their 50s will suffer from ED, and around 30 million Americans are experiencing it currently.

The now popular drug to treat the condition is Viagra, which is developed by Pfizer, and it has seen a surge of use in recent years.