New York City officials have come under fire for a botched rollout of moneypox Vaccines for at-risk gay and bisexual men just two days before Pride – amid fears festivities for the annual event will trigger a surge in cases.

Thirty cases of the rash-causing virus have already been detected in the Big Apple, with almost all among men who have sex with men.

In an attempt to stem cases, the city’s Department of Health began rolling out vaccinations at a walk-in center for gay or bisexual men who had multiple sexual partners over the last two weeks.

But after a line of more than 100 men-long formed within hours, the city was forced to suspend the offer.

Critics say the jab should have been rolled out sooner, as even the Lucky few who did receive a shot Thursday will not be fully protected from monkeypox for at least two weeks – too late for this weekend’s festivities.

Speaking to CBS on Thursday, one citizen expressed fears over a prospective explosion of cases over the weekend.

‘I think lots of gay men in New York have been keeping tabs on it closer than our straight counterparts,’ he said.

‘I think that lots of us have heard stories of a friend of a friend who got monkeypox – and it felt there was a sense of if we didn’t get the vaccine now, especially after we’re going to see so many friends this weekend at pride that we would eventually get monkeypox. ‘

Scroll down for video:

The decision saw hundreds of gay and bisexual New Yorkers that met the city stipulations for the shot turned away, amid fears of a prospective explosion of cases during Pride Celebrations 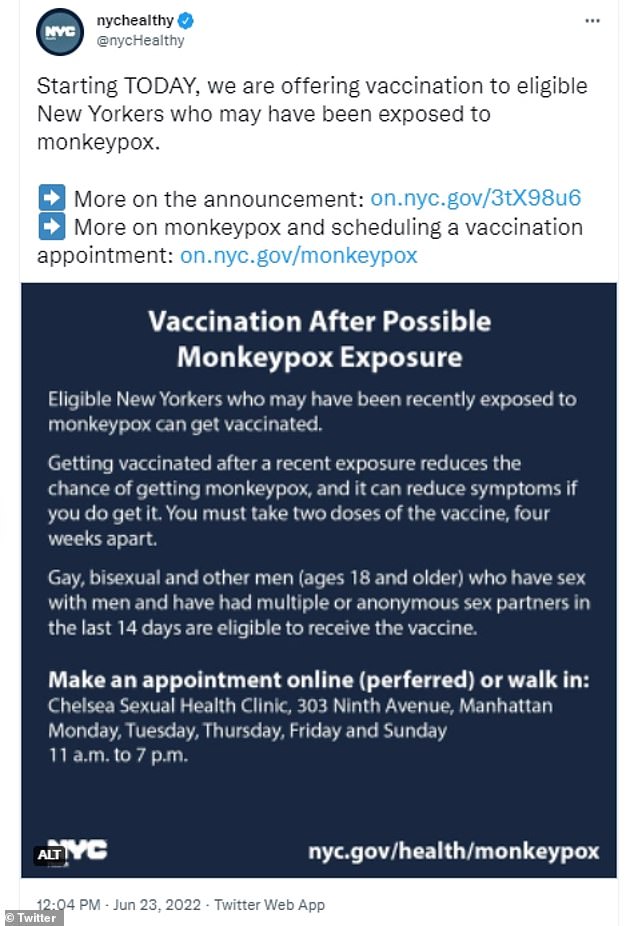 Demand for the jab quickly exceeded the city’s supply, forcing officials to nix the program within hours of its launch

‘Starting today, we are offering vaccination to eligible New Yorkers who may have been exposed to monkeypox,’ the NYC Department of Health and Mental Hygiene wrote just after 12pm.

The demand, however, quickly exceeded the city’s supply, forcing officials to nix the program within hours of its launch.

At 1:57, the agency wrote: ‘Due to high demand, we will no longer be able to accommodate walk-ins today. Check back on Sunday for additional appointments. ‘

It added that all appointments for a first dose of the two-dose Jynneos vaccine were filled through Monday.

The decision saw hundreds of New Yorkers that met the city stipulations for the shot – gay, bisexual, and other men who have sex with men ‘who are 18 or over and have had’ multiple or Anonymous sex partners in the last 14 days – turned away. 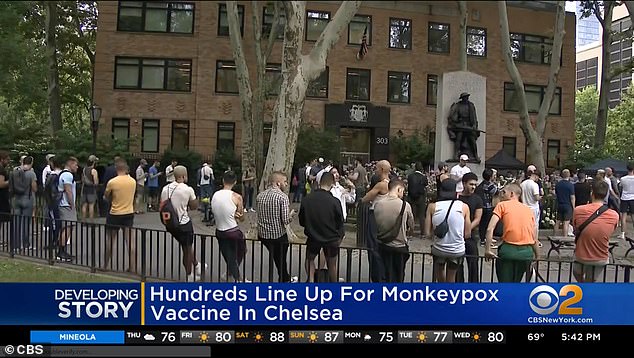 Monkeypox vaccinations will continue to be administered at the Clinic between 11am and 7pm on Mondays, Tuesdays, Thursdays, Fridays and Sundays, the said.

Just 1,000 doses of the Jynneos vaccine were in the city’s supply prior to the seemingly impromptu rollout, but city officials said they are working with the CDC to request more from the federal government.

They have not revealed how they are determining whether patients have sex with men or have had multiple sexual partners, although this is likely to be done through a questionnaire.

US boosts monkeypox testing in bid to speed diagnoses

The Biden administration has started shipping monkeypox tests to commercial Laboratories, in a bid to speed diagnoses for suspected infections.

It said this would significantly expand the nation’s capacity to test for monkeypox.

Previously, testing has largely been confined to public health labs, which combined have a capacity of about 8,000 tests per week.

‘All Americans should be concerned about monkeypox cases,’ said Health and Human Services Secretary Xavier Becerra in a statement.

‘Thankfully we are right now the tools to fight and treat cases in America.

‘By dramatically expanding the number of testing locations across the country, we are making it possible for anyone who needs to be tested to do so.’

It was designed to fight smallpox, but health officials say it can also work against monkeypox because the two viruses are similar.

After running out of Slots today, the Department said: ‘We hope to make more appointments available soon.

‘We are in talks with the Centers for Disease Control and Prevention to obtain more doses and are looking into how we can boost our capacity citywide.’

New York is one of the first cities in America to start rolling out monkeypox vaccines more widely.

It had already been offering the jabs to close contacts of confirmed monkeypox cases.

Canada and the UK both started Rolling out Vaccines to at-risk gay and bisexual men weeks ago.

Announcing the roll-out today, Mayor Eric Adams said: ‘As I have said since day one, we are prepared, not panicked and this monkeypox vaccination site is one more critical tool to keep New Yorkers healthy.

‘Starting today, eligible New Yorkers who may have been exposed to monkeypox can now get vaccinated to stay safe and slow the spread.’

America has now spotted a total of 173 cases of the virus Nationwide in almost half of its states.

Experts fear many more cases are currently going undetected, however, because they have been mistaken for other diseases or due to a lack of testing.

New York City has the biggest outbreak of any city Nationwide.

At the state level, California has the biggest outbreak with 48 cases, followed by the state of New York and Illinois with 19.

The Biden administration today announced it was Rolling out swabs for the disease to commercial Laboratories in an attempt to speed up diagnosis and control measures.

It comes as America gears up for more Pride Celebrations this weekend across major cities.

Chicago health officials have said they will put a ‘special emphasis’ on Pride in their warnings this weekend, and have printed off fliers to be handed out at events on protecting yourself against monkeypox.

San Francisco has also said it will be making ‘public service Announcements’ during Pride in the city – expected to draw crowds of more than 500,000 – to remind people to stay safe.

Now people who catch monkeypox suffer from a mild infection that clears up within four weeks.

But statistics suggest about one in 100 people who are infected face a serious illness that results in their death.

The disease is primarily transmitted through physical contact with infectious skin lesions, or through touching clothes and bedding that came into contact with a patient.

In rare cases, it can also be passed through ‘sustained’ face-to-face contact the CDC says.