Travel Mayhem stretched to the eighth day with thousands of flights delayed and over 500 cancelations in the US, sparking Fourth of July Chaos fears.

As of Friday morning, over 2,104 flights were delayed within, into or out of the US, according to FlightAware. An additional 543 flights were canceled across the Nation.

Some of the major airlines have been accused of making a bad situation Worse as the crisis continues.

Multiple Twitter users Accused Delta and American Airlines of leaving them on hold for hours, with one saying they’d been waiting for three days to check in on their over $ 1,200 Delta reimbursement claim Filed nearly three weeks ago and went without a response.

Another Accused airline of simply ‘ghosting’ them by Refusing to continue to respond to their complaints in customer service.

Travel Mayhem stretched to the eighth day with thousands of flights delayed and over 500 cancelations in the US, sparking Fourth of July Chaos fears

American Airlines was criticized by Traveler Brayden McMahan, who said his group was given hotel vouchers but they’d been declined at the hotel; he added that three others staying at the same hotel experience the same issue. McMahan’s kids were forced to sleep on chairs.

Other Twitter users posted photos of lost bags piling up at baggage claims and dozens of people on standby, with no attending their Gates.

This comes as US consumers complained more than triple the number of complaints against US airlines in April, compared to pre-Pandemic levels, as on-time arrivals fell, according to a report by the Department of Transportation.

In April, major carriers posted an on-time arrival rate of 76 percent, down from 77.2 percent in March and below the 79.8 percent rate in April 2019, the report said. 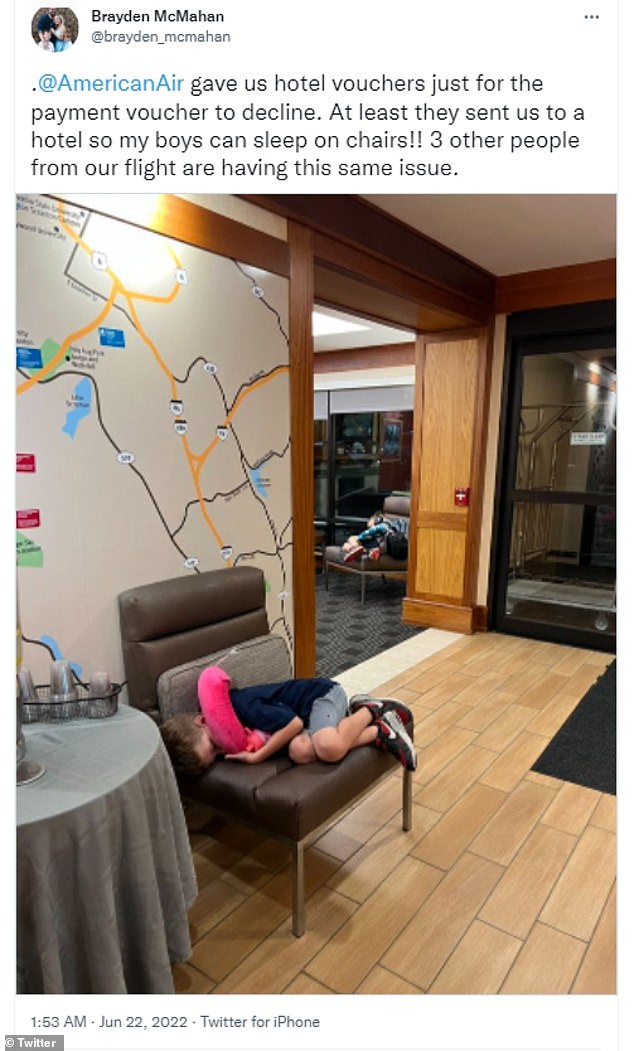 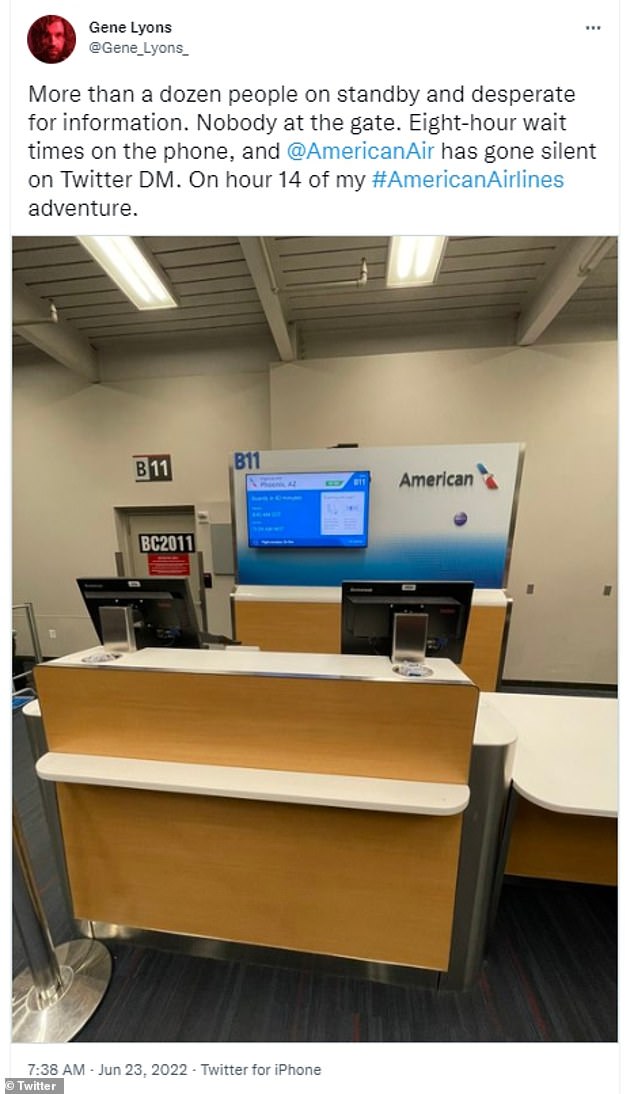 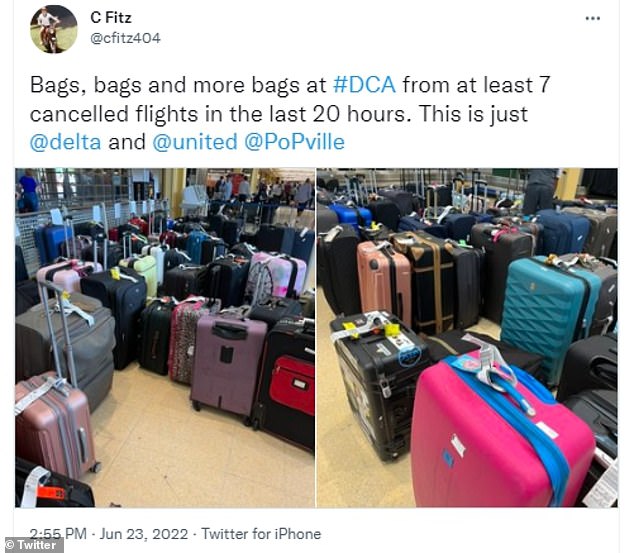 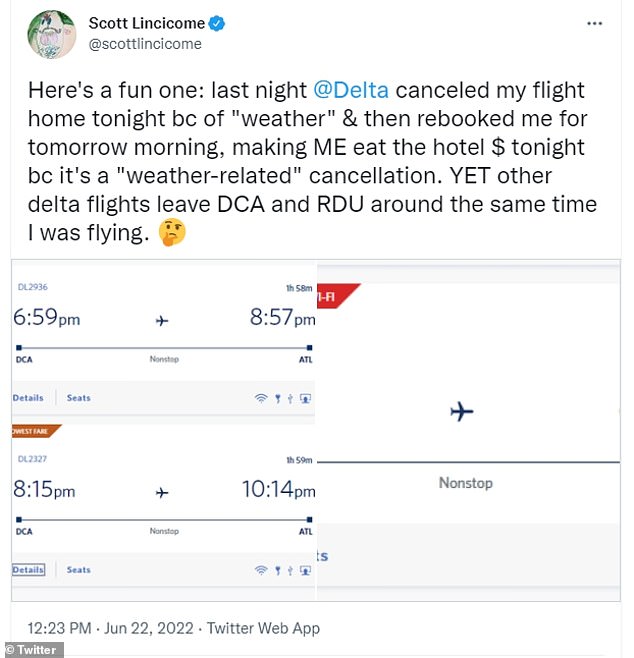 Airlines operated 566,893 flights in April, about 87 percent of flights flown during the same month in 2019.

Trade group Airlines for America told US Transportation Secretary Pete Buttigieg in a letter that Staffing challenges are disrupting flights – even in good weather. The group noted that the Jacksonville Air Route Traffic Control Center in Florida had been ‘understaffed for 27 of the last 30 days, which is crippling to the entire east coast traffic flows.’

In New Jersey, United Airlines will cut about 50 flights a day out of Newark in an attempt to reduce long delays that the airline blames on airport construction and other issues.

The cuts – about 12 percent of United flights in Newark – will start on July 1 and last the rest of the summer. United is the main airline of Newark Liberty International Airport, which is just across the Hudson River from New York City, and gets heavy use from people living in and around the city.

Only domestic flights will be reduced, a United spokeswoman said Thursday, adding that United will not drop any destinations from Newark. The airline got a waiver from the Federal Aviation Administration to reduce flights, she said.

Travelers are already facing a difficult summer as airlines expect record demand and as they rebuild staff levels after thousands of workers left the industry during the COVID-19 Pandemic. As of early afternoon Friday, airlines had canceled 525 flights and delayed more than 1,800.

Airlines for America sought a meeting with transportation officials ‘to discuss how we can work together to better understand FAA´s controller Staffing plan for the upcoming July 4th weekend and summer travel season.’ 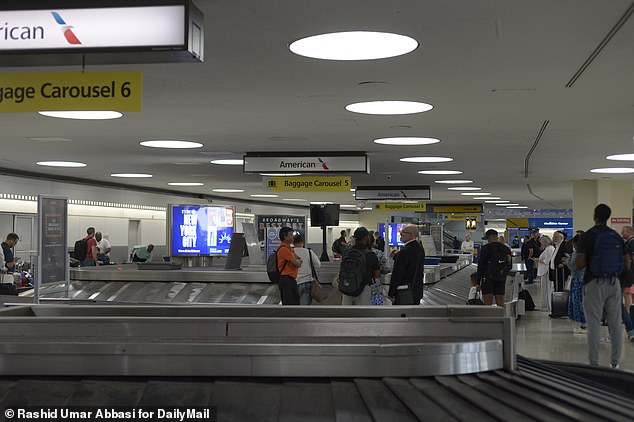 The U.S. Department of Transportation and the FAA did not immediately comment.

The FAA said in early May it would boost air traffic control staff in Florida after bad weather and space launches had often snarled flights in recent months.

Last week, Buttigieg called the chief executives of major US airlines to a virtual meeting to discuss thousands of recent flight cancellations and delays over the Memorial Day holiday weekend. They urged airlines to ensure they can reliably operate planned summer schedules.

Airlines for America said in its Friday letter, which it released publicly, that carriers ‘pulled down 15 percent of summer (June-August) flights relative to what they had planned for at the outset of 2022.’

The letter said one carrier estimated ATC-related issues ‘were a factor in at least one-third of recent cancellations.’ The group said ATC ‘Staffing challenges have led to traffic restrictions under blue sky conditions.’

The letter also said it was ‘imperative’ to ensure adequate staffing at the New York Terminal Radar Approach Control. It urged the FAA to ‘share its Staffing plan with airlines’ for the July 4 holiday period and to schedule space launch airspace closures ‘to avoid high-volume air traffic times.’